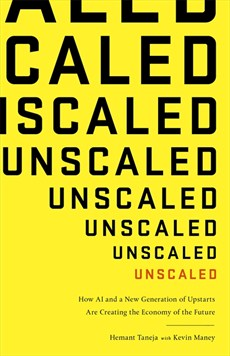 Hemant Taneja is Managing Director at General Catalyst, a Silicon Valley based venture capital firm. In search of better education for him and his sister his family emigrated from India to the US when he was a child, "the biggest risk we ever took as a family – and it probably helped me understand the value of taking risks based on a vision of how things can be" he claims. From scratchy beginnings the risk has clearly paid-off. Taneja was part of that gilded generation of internet founders; he was friends with Sal Khan of the Khan Academy at MIT, and found himself on the West Coast at the time when the founders of Facebook and others were looking to invest their new found billions. If you believe life is about playing the cards you are dealt, Taneja appears to have played his well.

Listen to our podcast with Hemant Taneja for more insights

The underlying ethos of General Catalyst's investment approach in new ventures is the root of this book: the economy of the future is built on 'unscaled' organizations. The 20th century saw organizations grow based upon their ability to integrate vertically and scale accordingly. From Henry Ford's Model T onward the focus was about serving mass markets with high quality but standardized products. Almost anyone could buy a car once the Model T started rolling off the production line – but it had to be black, and so it continued across the century and the industrial sectors. The arrival of computer-power did little to alter this until the ubiquity of the internet and the appearance of computers that can learn how to improve themselves as they acquire more data started to take hold in the early 21st century. This Artificial Intelligence power opened the door for scale to lose its importance and agility and personalization to take hold, and organizations to focus on horizontal growth instead – what Taneja terms 'unscale'.

2007 is Taneja's key year for the AI revolution when mobile computing (iPhone), cloud computing (Amazon Web Services, AWS) and social networking (Facebook) took off together. The last decade has seen the creation of so much data through this triumvirate that AI has been able to surge ahead in ways that the lack of data before never allowed.

The existence of these behemoths that provide the platforms that support these services allows one-person and their idea to leverage access to millions to make their business, unlike in the last century they can now rent scale from the platforms – virtually for free – and not have to buy or build it themsleves. Uber could not exist without mobile communications and cloud computing platforms; nor the Stripe online payments business, nor the Dollar Shave Club. All these businesses have emerged from small ideas that piggyback off the existing platforms – and all are eating the scaled incumbents market share. A tipping point will occur, he sees, when the costs of the scaled business outweigh its market size and sinks them, unless they become platforms themselves to allow others to operate off.

The opportunities Taneja sees are enormous – and massively disruptive, particularly to traditionally scaled businesses. One only needs to look at the classic cases of Kodak, Nokia and newspapers to see how they might be felled by upstarts. And these upstarts are offering highly personalized product or services – Uber is after all an on-demand driver. Taneja sees that the personalization of healthcare and education will revolutionize the existing sytems; changing healthcare from reactive to preventative (as data will flag up problems before they arise through wearable technology and AI analysis) and education will be spread over entire lifetime's as adapting to change will have to be done more frequently. This, in turn, will make them cheaper and remove two of today's most costly service provisions people face. He explores the effects if unscale across the key sectors in the book. So all is good?

Taneja is an optimist and sees the glass as more than half-full on the benefits this personalized, unscaled world will bring. But he is not blind to the problems too. Platforms, almost by definition, need to be monopolies and will create risk for those who use them and vast power for those who control them. Those who write the algorithms will inherit the earth… the risk that algorithms can be tweaked to deliver socially undesirable effects is enormous (viz Facebook inadvertently promoting fake news as it is more salacious and likely to be shared, which is good for advertising revenue). He also references the high risk that AI taking over many mundane jobs will consequently leave many without work. A brief nod to Universal Basic Income and even briefer nod to the concerns of 'purposeless' swathes of the population is acknowledged but without the eager energy that he foresees the 'multibillion dollar personal healthcare industry". Taneja is a venture capitalist not a policy-maker though. His book envisions a highly plausible future – it is up to others to manage the environment and regulations it operates in, so that society is not further divided in terms of wealth, power and maybe health and intellect too.