The CEO Next Door - Ideas for Leaders
BOOK REVIEWS

The CEO Next Door

Embracing Brand Citizenship to Fuel Both Purpose and Profit 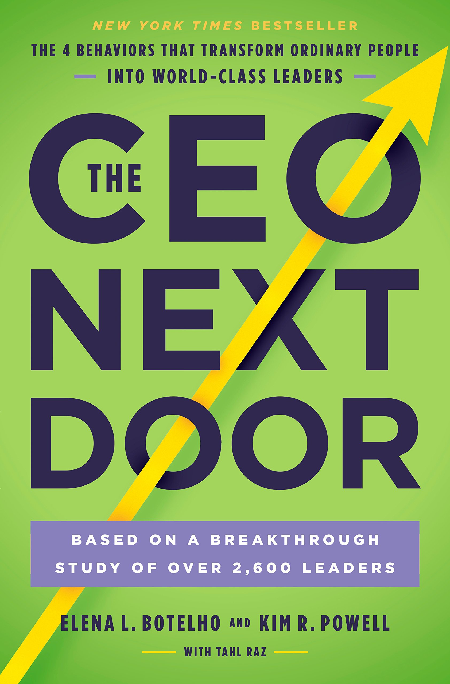 Elena Botelho is a partner at leading management consultancy ghSMART and has advised over 200 CEOs and Boards. Although she grew up in Azerbaijan and Russia in a family of mathematicians she received her MBA from Wharton and now is based in the US. Kim Powell, got her MBA at Kellogg School of Management before joining BCG and then ghSMART. Together they run ghSMART's 'CEO Genome' project that traces the characteristics of what CEOs are made from – and that this book is based upon.

Drawing on the enormous leadership database of ghSMART and collaborating with analysts at Chicago and NYU Universities amongst others, the authors distilled the amassed data on thousands of leaders and found that though their backgrounds and context varied radically, there were four recurring characteristics that all successful CEOs practiced. The ability to make decisions quickly; engaging with stakeholders; relentless reliability; and preparedness to adapt boldly when required.

Despite the Hollywoodesque stereotype of a CEO being "a six-foot tall, white, male, 'Master of the Universe' " type from an Ivy League school, very few actually fit that model (in fact only 7% of the authors' sample were Ivy League graduates). The authors' realisation of this provoked them to ask the question "are all the 'unlikely' CEOs we know simply lucky exceptions? Or does conventional wisdom gt it all wrong about what a successful CEO looks like and what it takes to get there?"

The four key characteristics are fostered over long-careers, that fall into three broad stages. The early years are diverse, collecting generalist experience across differeing functions and industries, this is the 'go broad' stage; after eight years or so, the second 'go deep' stage is entered, where results become important, running a P&L or being a functional leader; then they 'go high' in the 3rd stage, becoming enterprise leaders and start to look like CEOs. These trajectories will vary enormously in reality and the authors outline several typical routes. Other elements frequently seen on the CEO journey are an ability and enthusiasm to make yourself visible, being relevant and telling relevant stories.

Once in the CEO role hazards still abound: corporate skeletons in the cupboard; the relentless pace which needs to be controlled; permanently being in the spotlight may be an initial attraction but becomes exhausting quickly; using the breadth of their CEO influence not just the ones they are familiar with; remaining fit, stable and authentic.

This book does much more than just explore the 4 common characteristics of CEOs. While being decisive, engaging, reliable and adaptable are all areas to work on – in many ways it is the highlighting of the routes that CEOs have travelled to reach the top, and the obstacles they have overcome to success once there that are as important to understand. Not just for those focused on the top job, but everyone looking to expand their leadership brief.