How Successful Leaders Make It to the Top 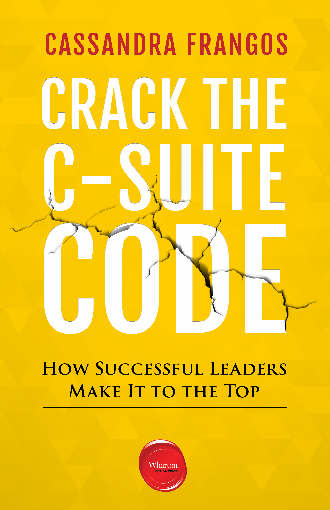 Cassandra Frangos is a consultant with global executive search firm Spencer Stuart's Leaderhip Advisory Services, having previously led Cisco's Global Executive Talent practice. She has contributed to many business journals including Fortune, Forbes and HBR and was nicknamed 'the executive whisperer' by Diversity Woman magazine; Frangos brings years of research and hundreds of senior executive interviews together to inform her framework in this book.

At the other end of the management journey from 'How Did I Not See This Coming' this book is aimed at those executives with a steely eye on reaching the C-Suite, for whatever personal reasons they may have. The C-Suite, those senior executives roles beginning Chief, like CEO or CFO, are the coveted positions at the top of organizations. They tend to be the highest paid, but more symbollically indicate the holder has reached the top-most rungs of the executive ladder. They are as such the target positions for many ambitious career-makers. Frangos traces the various routes to these positions, the subtext being that a pre-meditated strategy is required to bag the C-level jobs.

The results of Frangos's research is that there are four typical paths to C-level positions. The Tenured Executive – those who work their way relentlessly up through the same organization, being rewarded for their strategic and organizational abilities. This is the most frequent route taken and has much going for it, a deep understanding of the organizational culture and people with in it, and a known quantity and credibility as far the rest of the employees are concerned. This route is still the pre-dominant one, but is diminishing in popularity. NEW PARA The Free Agent, describes an executive who has been successful in one organization but then moves to another to take the top or heir-apparent role. It represents the bought-in approach over the home-grown one. They tend to hired due to their 'change agent' status – they are new and will be different to what has gone before. Frequently they can be pased-over tenured executives. NEW PARA The Leapfrog Leader, is the newest route to the top, where younger talent is selected from one or two levels below where next leaders normally come from. They can also be brought in from other industries. Again this tends to occur when the organization is looking for a new focus or strategic direction that the current senior executives are unable to provide expertise in. NEW PARA The final route is the Founder one. Citing research that fast-growth start-ups are twice as likely to be founded by over-50s than under-35s, this path is to create your own organizaton to lead. It is the riskiest, but can bring highest rewards both extrinsically and intrinsically.

Frangos in this comendably short review of the routes to the top of organizations, draws on a rich fund of examples to illustrate and give insight on the varying pathways to the C-Suite. What is less clear is whether these pathways can really be chosen in advance, or are merely understood once the opportunities have arisen and choices taken. The playbook for the different routes may change where the emphasis is needed, but the core repertoire of skills and competencies required, as Frangos clearly sets them out, are largely interchangeable – an ability to manage uncertainty, and a depth of resilience for when things inevitably go awry; some deep sector knowledge/expertise/experience; skill at networking both internally and externally and building your personal brand. These are all core skills leaders at all levels need to acquire – the field of play they can display them on may just vary in size and visibility depending on your position on the executive ladder and size of organization you are in.