Shut Down the Business School - Ideas for Leaders
BOOK REVIEWS

Shut Down the Business School 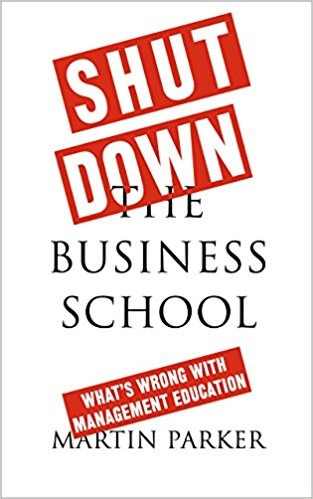 Martin Parker is a management professor at University of Bristol, though trained originally in anthropology and sociology. He co-authored/edited 'The Dictionary of Alternatives: Utopianism and Organization' which covers the same ground as this book but from a different perspective.

Parker sees that Business Schools sit awkwardly in the academic sector. They are equally admired and despised. Admired for their ability to create profit and so fund other things in the university, despised as they fail to clearly conform to traditional academic discipline and the 'public good' test.

His real gripe though is that unlike almost all other university subjects, business schools focus on an ever-narrowing definition of how organizations can operate, and so reduce the horizons of opportunity of their students to a very limited, prescribed set of alternatives. Business schools are advocates for 'market managerial capitalism' and very little else is explored or acknowledged in them.

Parker's background as an anthropologist and sociologist has led him to a heightened awareness that other types of organizational structure exist – and his objective in this polemic is to encourage students to study a broader horizon of alternatives so that they can assess, evaluate and innovate what other structures for running businesses might work beyond that advocated in 'the Global North': market managerial capitalism.

He is not necessarily advocating doing away with this dominant business structure, but suggesting that understanding how other forms of business, whether that be co-operatives or managerless organizations or merely networked ones or any other of a myriad of options, might enhance and strengthen societies and economies. His solution for this is a School of Organization which will create designers and architects of change, drawing on diversity like real designers and architect do. Fashioning new solutions for different challenges, by selecting the best of a much wider variety of sources than are currently ever explored.

Parker clearly sees the limitations of the present approach and cites plenty of supporting evidence from Mintzberg to Chantal Mouffe on the weakness of the current system around teaching managers and the politics of organizations.

By-the-by he also includes a rather good overview of the evolution of the Business School, and the fact that it is a French not US invention; something much overlooked in today's Anglo-Saxon business model ruled world.

The book is perhaps timely, in that we are increasingly being told that organizations needs to find greater purpose to keep talented employees, particularly Millennials. So if a world where maximising profit is ceasing to be the only goal, and rational beings are being seen to be economic persona only, while real humans have more complex sets of needs, the opportunity for a more diverse range of commercial enterprise structures is undoubtedly increasing – and a School of Organization is perhaps more of a possibility than even the author contends. He sees four drivers for such a school and dismisses three of them (the state, professional bodies, the academics) as being too tied to the status quo to encourage radical change. Which leaves the students to do it. However he appears to overlook – in an ironically academic way – a fifth. Perhaps society will desire an alternative and so create the demand for which, to use a market managerial capitalist model term, the School of Organization can supply.